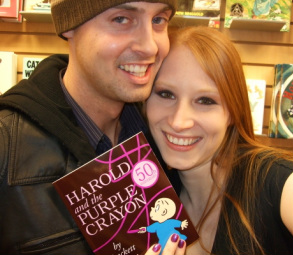 Myspace.  Seriously.  So I log into my account one day (back before myspace was the dead horse it is now), and lo and behold I have a message from a guy.

Not to toot my own horn, but this was nothing all that new.  Myspace had a considerably large amount of creepers.  I was expecting something along the lines of "You're hot.  Let's get together."

Instead, he had commented on one of my "favorite books."  His pickup line was, "You don't find many people who appreciate the literary merit of Harold and the Purple Crayon these days.  Have you ever seen the movie they made of it?"  End of message.

Admittedly, I was intrigued.  Here was a guy who made me laugh and interested in 2 sentences.  He was also holding a bass in his profile pic, and I am notoriously in love with bassists, so that helped.

After several messages, having all of my friends check him out to confirm that he's not a crazy person, and a month of stalling, he and I went on our first date.  We had coffee, then read kids books together at Borders.  Harold was, of course, the first on the agenda.  It takes the cake for the weirdest first date I've been on, but man was it fun.  We both had a blast, and I ended the memorable date with a sexy... handshake.  Must have been one heck of a handshake, though.  It wasn't long before date #2. 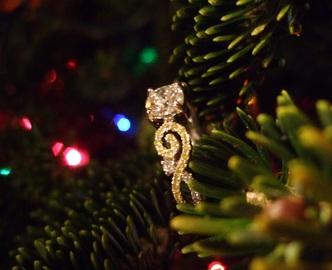 Marry him!  To be honest, it wasn't really a surprise.  I helped pick out the ring design, and he told me when he ordered the ring.  But the clincher was when he came home one day, and I gave him a big hug.  He had a rather large ring box sized lump in his pocket.  Without thinking, I went "What's this?" and grabbed the lump.  As soon as I grabbed it, I realized.  His look of horror also indicated that I probably knew what was in his pocket.  Crap!

But then he said the element of surprise was ruined so now he had to think of the perfect proposal.  Apparently, "think of the perfect proposal" meant "wait in agony for a month while I think of something."  This was around October/November.  Now he knew that we were going to visit my family for Thanksgiving and also knew that I really wanted to show them my pretty new ring when we went.

So he thought of this idea that we'd have Chinese food and he'd propose with a fortune cookie asking me to marry him.  Great idea.  He ordered the cookies online.  3 weeks later, and he was cookieless, desperate, and we were leaving for Ohio in a few days.  So he got creative.

It was the Sunday before we were leaving, and I was at work all day.  I come home to find all of the lights turned down low in the house, and he had gone out and bought, set up, and even lighted a real Christmas tree!  A few months earlier we had gotten into the real vs. fake tree debate.  I told him about all the great real trees I'd had as a kid, and he said he'd never want a real tree cause they're so much hassle.  But I suppose the hassle was worth it this time.  Astonished, I walked toward the tree, and sitting in the branches was a ring box.  He came into the room, said a whole bunch of sweet things, then we stood there for a second......

Then I said, "Are you gonna ask me something?"  To which he got down on a knee and asked me to marry him.  I'd take the Christmas tree proposal over the cookies any day!  It was absolutely perfect, and I still got to show my whole family my breathtakingly gorgeous new ring!  :)

The cookies came in the mail the next day.